It had been over 20 years since Cooke & Hutchinson had resided in 19 Redcliffe Parade and the time had come to upgrade and move into more suitable premises. Number 19 held many fond memories for all of the C&H staff, past and current, but everyone was very excited to learn that from the middle of 2011, Cooke & Hutchinson’s new address would be in the brand new shopping complex across the road, Bluewater Square. While there were a number of options available, both Dan and Gary new from the moment they saw the plans of the complex that Bluewater offered everything they were looking for. 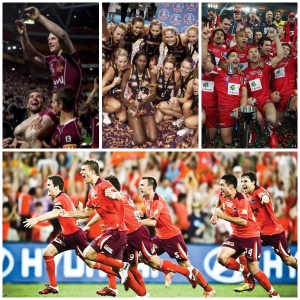 This was a move that had been in the pipeline for years and was the first major step of Gary and Dan’s new plans for the future of their firm.

Some of the other big events of this year were:

– Brisbane and outer regional areas such as Ipswich, Toowoomba and the Lockyer Valley experience their worst flooding in decades. Julia Gillard announces a flood levy to help fund reconstruction in the hardest hit areas;

– After industrial action by its pilots, ground staff and engineers, Qantas responds by grounding its entire domestic and international fleet;

– Barack Obama visits Australia to commemorate the 60th anniversary of the ANZUS alliance;

– In a sensational sporting year for Queenslanders, the Firebirds win the ANZ Netball Championship, the Reds win the Super Rugby Championship, the Maroons win their six consecutive State of Origin series and the Brisbane Roar win their first A-League championship in the most dramatic of circumstances, prevailing 4-2 in a penalty shootout after staging a last minute extra time comeback;

– The Arab Spring movement begins in Tunisia in January. In the following months, similar civilian uprising in other Arab nations such as Bahrain, Libya and Egypt protest against decades of abuse of power, brutality and neglect by the regimes;

– Osama bin Laden is shot and killed by US and CIA forces in his hideout in Abbottabad, Pakistan;

– Rupert Murdoch’s British tabloid News of the World is forced to permanently cease publication after it emerges that journalists routinely tap the phones of public figures, celebrities, military personnel and victims of crime;

– Italian president Silvio Berlusconi is forced to resign from power after a series of personal scandals;

– Japan is rocked by an earthquake that sends a 23 foot tidal wave into the country’s northern coastline and a nuclear crisis develops after cooling systems in one of the Fukushima reactors fails. At least 16,000 people lose their lives;